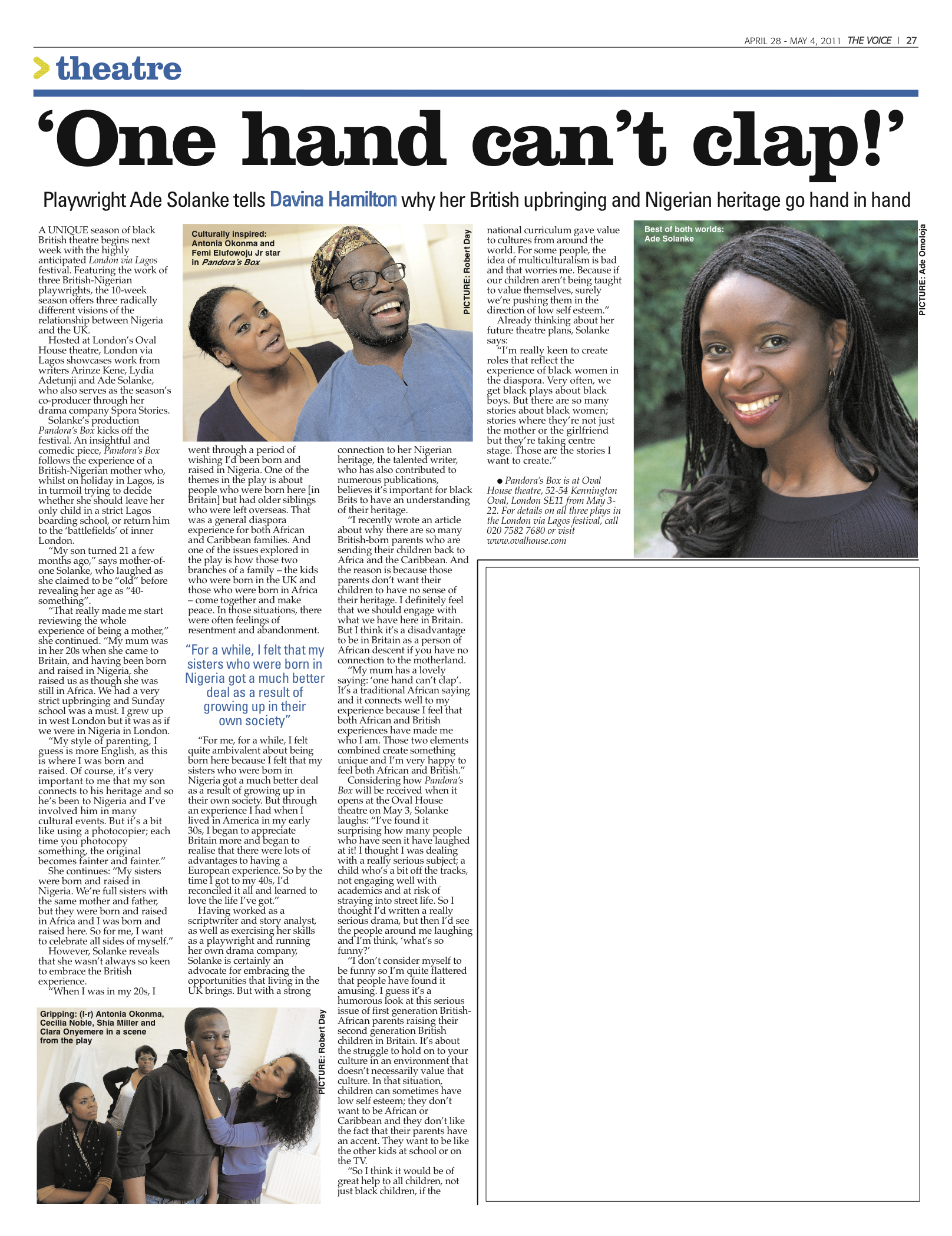 A UNIQUE season of black British theatre begins next week with the highly anticipated London via Lagos festival. Featuring the work of three British-Nigerian playwrights, the 10-week season offers three radically different visions of the relationship between Nigeria and the UK.

Solanke's production Pandora's Box kicks off the festival. An insightful and comedic piece, Pandora's Box follows the experience of a British-Nigerian mother who, whilst on holiday in Lagos, is in turmoil trying to decide whether she should leave her only child in a strict Lagos boarding school, or return him to the 'battlefields' of inner London.

"My son turned 21 a few months ago," says mother-of-one Solanke, who laughed as she claimed to be "old" before revealing her age as "40-something".

“That really made me start reviewing the whole experience of being a mother,” she continued. “My mum was in her 20s when she came to Britain, and having been born and raised in Nigeria, she raised us as though she was still in Africa. We had a very strict upbringing and Sunday school was a must. I grew up in west London but it was as if we were in Nigeria in London.

“My style of parenting, I guess is more English, as this is where I was born and raised. Of course, it’s very important to me that my son connects to his heritage and so he’s been to Nigeria and I’ve involved him in many cultural events. But it’s a bit like using a photocopier; each time you photocopy something, the original becomes fainter and fainter.”

However, Solanke reveals that she wasn’t always so keen to embrace the British experience.

“When I was in my 20s, I went through a period of wishing I’d been born and raised in Nigeria. One of the themes in the play is about people who were born here [in Britain] but had older siblings who were left overseas. That was a general diaspora experience for both African and Caribbean families. And one of the issues explored in the play is how those two branches of a family – the kids who were born in the UK and those who were born in Africa – come together and make peace. In those situations, there were often feelings of resentment and abandonment.

“For me, for a while, I felt quite ambivalent about being born here because I felt that my sisters who were born in Nigeria got a much better deal as a result of growing up in their own society. But through an experience I had when I lived in America in my early 30s, I began to appreciate Britain more and began to realise that there were lots of advantages to having a European experience. So by the time I got to my 40s, I’d reconciled it all and learned to love the life I’ve got.”

Having worked as a scriptwriter and story analyst, as well as exercising her skills as a playwright and running her own drama company, Solanke is certainly an advocate for embracing the opportunities that living in the UK brings. But with a strong connection to her Nigerian heritage, the talented writer, who has also contributed to numerous publications, believes it’s important for black Brits to have an understanding of their heritage.

“I recently wrote an article about why there are so many British-born parents who are sending their children back to Africa and the Caribbean. And the reason is because those parents don’t want their children to have no sense of their heritage. I definitely feel that we should engage with what we have here in Britain. But I think it’s a disadvantage to be in Britain as a person of African descent if you have no connection to the motherland.

Considering how Pandora’s Box will be received when it opens at the Oval House theatre on May 3, Solanke laughs: “I’ve found it surprising how many people who have seen it have laughed at it! I thought I was dealing with a really serious subject; a child who’s a bit off the tracks, not engaging well with academics and at risk of straying into street life. So I thought I’d written a really serious drama, but then I’d see the people around me laughing and I’m think, ‘what’s so funny?’

“I don’t consider myself to be funny so I’m quite flattered that people have found it amusing. I guess it’s a humorous look at this serious issue of first generation British-African parents raising their second generation British children in Britain. It’s about the struggle to hold on to your culture in an environment that doesn’t necessarily value that culture. In that situation, children can sometimes have low self esteem; they don’t want to be African or Caribbean and they don’t like the fact that their parents have an accent. They want to be like the other kids at school or on the TV.

“So I think it would be of great help to all children, not just black children, if the national curriculum gave value to cultures from around the world. For some people, the idea of multiculturalism is bad and that worries me. Because if our children aren’t being taught to value themselves, surely we’re pushing them in the direction of low self esteem.”

“I’m really keen to create roles that reflect the experience of black women in the diaspora. Very often, we get black plays about black boys. But there are so many stories about black women; stories where they’re not just the mother or the girlfriend but they’re taking centre stage. Those are the stories I want to create.”